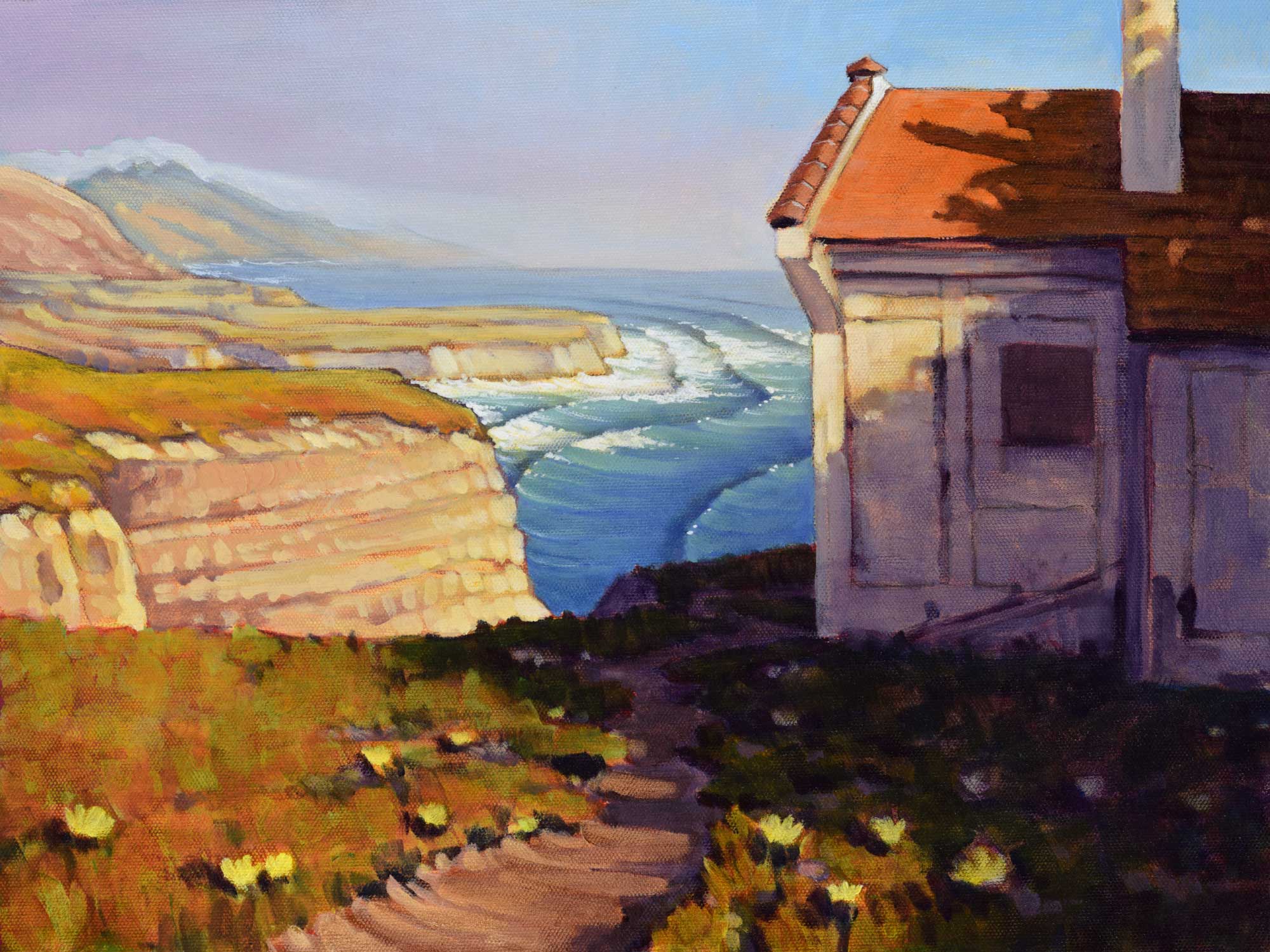 So this was different. There's a really great beach park 6 miles north of here that I hadn't painted for awhile. I was on my way through the area and thought it would be fun to return and see what I could do with it after a few years of pushing my art process a little further along. I had the idea to hike to a small bluff just north of the park and explore for a different view from over there. I made it about ten feet from my van and then had an idea.

I recalled reading recently that you could hike to the lighthouse 6 miles south of the park at low tides. I didn't say I had a good idea. But I did have peanut butter and jelly sandwich just before setting out from the van so I figured I'd be good to go and off I went on a whim. Just to see how far I would get.  You know.

The tide seemed favorable, so I just kept going, and going, and going. All the way to the end of the beach. Now I didn't read anything too closely, I just thought I saw that I could walk to the lighthouse and when the beach came to an end at a sheer cliff, the only route to go any further was up a trail past one no-trespassing sign after another. I couldn't be sure I was doing this right, but I recognized the name on the sign as belonging the previous owners of the property and so I figured the new owners had some deal with the state worked out for access and just hadn't removed the signs yet. Sounds good, right? I thought so too.

So up the trail I went and over the bluff, marching in broad daylight right up to the turning point of all of California. Just before ascending the knoll was another gate of sorts, with new signs, this time from the Coast Guard saying that only authorized personnel were allowed. I'd come this far to see the light house that I was sure that I read I was allowed to see, so yes, authorized I was. A bit of an odd feeling, tromping past one sign after another with creeping sense that I'd made a wrong turn or missed something somewhere.

But up I went and checked out the whole scene. Didn't see a single person out there. Desolation row. I took some photos of the lighthouse itself but the wind was beyond next level and I wasn't having that, so I settled on this view from a shaded and sheltered spot in front of some old living quarters on the back of the knoll, looking due East! It was a view I had not expected to paint this day, or any other anytime soon.

I had to work exceedingly fast as the day was getting long, the tide was coming up and I had to jam 6 miles back to the car on foot before dark since I was just parked in the day-use spot. I was hoping for a burger at the park store too, but I had a sinking feeling the grill would be long cold by the time I made it back.

Tired and half-broken from the high tide rock scrambles, but proud to have two dry boots after numerous close calls, my tired body smiled as wide as my happy soul as I raised my feet and ate my second peanut butter and jelly sandwich of the day in my van before moving on.

Post-edit:
Later on I read a little more about the hike to the lighthouse. I was supposed to stay on the beach at the lowest tides and see the lighthouse from below. My bad. Sorry, but not sorry. It was an amazing day and my conscience was clean on this one.  Ignorance can be beautiful like that.