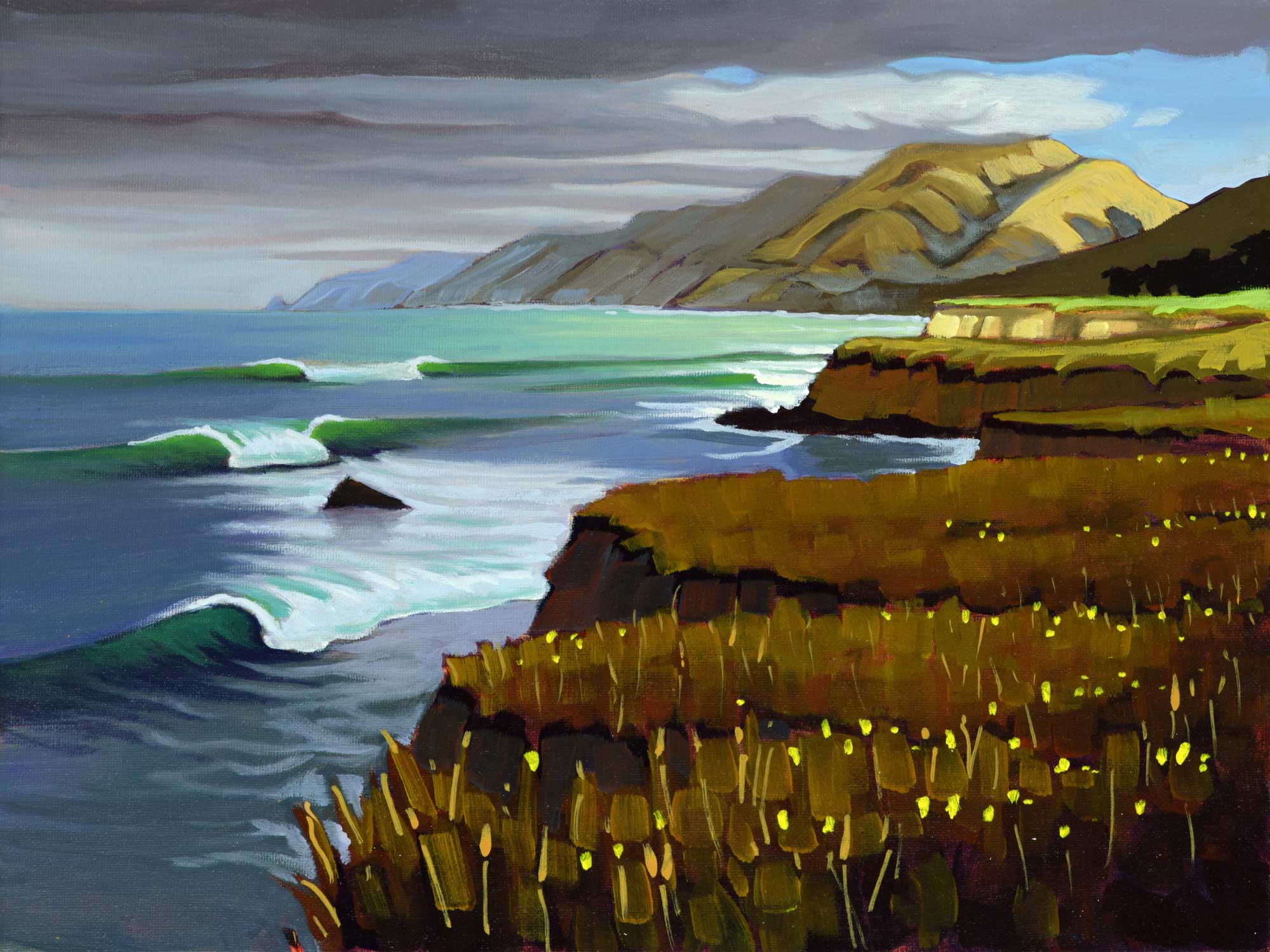 Under the barbed wire, across a bluff top meadow, promising lines appeared bending around the nearshore reefs. Don’t let the painting of this dreamy lineup fool you. Sure, in a still moment, it was a vision of perfection, but taken in the 4th dimension of time, it was nothing more than a broken promise. At least today. Broken lines, appearing, shifting, disappearing, reappearing at random across the reefs.

Except that one section, time and time again, it would suck out and rifle off a short makeable line before chaotically disembarking itself on the scattery dry rocks inside. I still don’t think it was truly rideable except perhaps with the right company and a certain state of mind, maybe not drunk on wine, but perhaps a bit intoxicated with old fashioned fun. And a beat up board. Maybe a helmet. Ok, probably not, but still maybe…

But whether the waves ever shape up or not, something happens here, as the worn path under the barbed wire fence testifies. Sometimes hunting for waves is high tech, satellite imagery and swell forecasting. Other times it’s a bit more primitive, scanning the ground for broken twigs and tracks not well covered, tracking an elusive prey. The hole in the fence here certainly falls under the latter category, though it could just be good fishing grounds. I’ve got a lot of mental notes on places like this up and down the coast.

It doesn’t matter too much to me if the clues lead to good waves or not though, it’s the process that I’ve come to love. This holy fence led to a 2 hour surf check in the early morning standing alone on a remote piece of coastline while studying the color and spacial relationships of the land and sea with paint.

Artwork Title: "Hole in the Fence"
Posted on August 22, 2017July 15, 2021 by Matt Beard
Categories: Artwork Notes, Artwork, Artwork Notes & Backstories
Tags: WILDFLOWERS, DARK AND MOODY, DRY GRASS, FLOWERS, FOG CREEPING OVER THE HILLS, JUST NATURE, LOOKING DOWN FROM STEEP CLIFFS, MARINE LAYER, ON THE ROCKS, OUT OF DARKNESS, OVERCAST, PERSONAL FAVORITES, PLACES NOBODY MIGHT HAVE EVER STOOD AND PAINTED BEFORE, RIGHTS, WATCH YOUR STEP