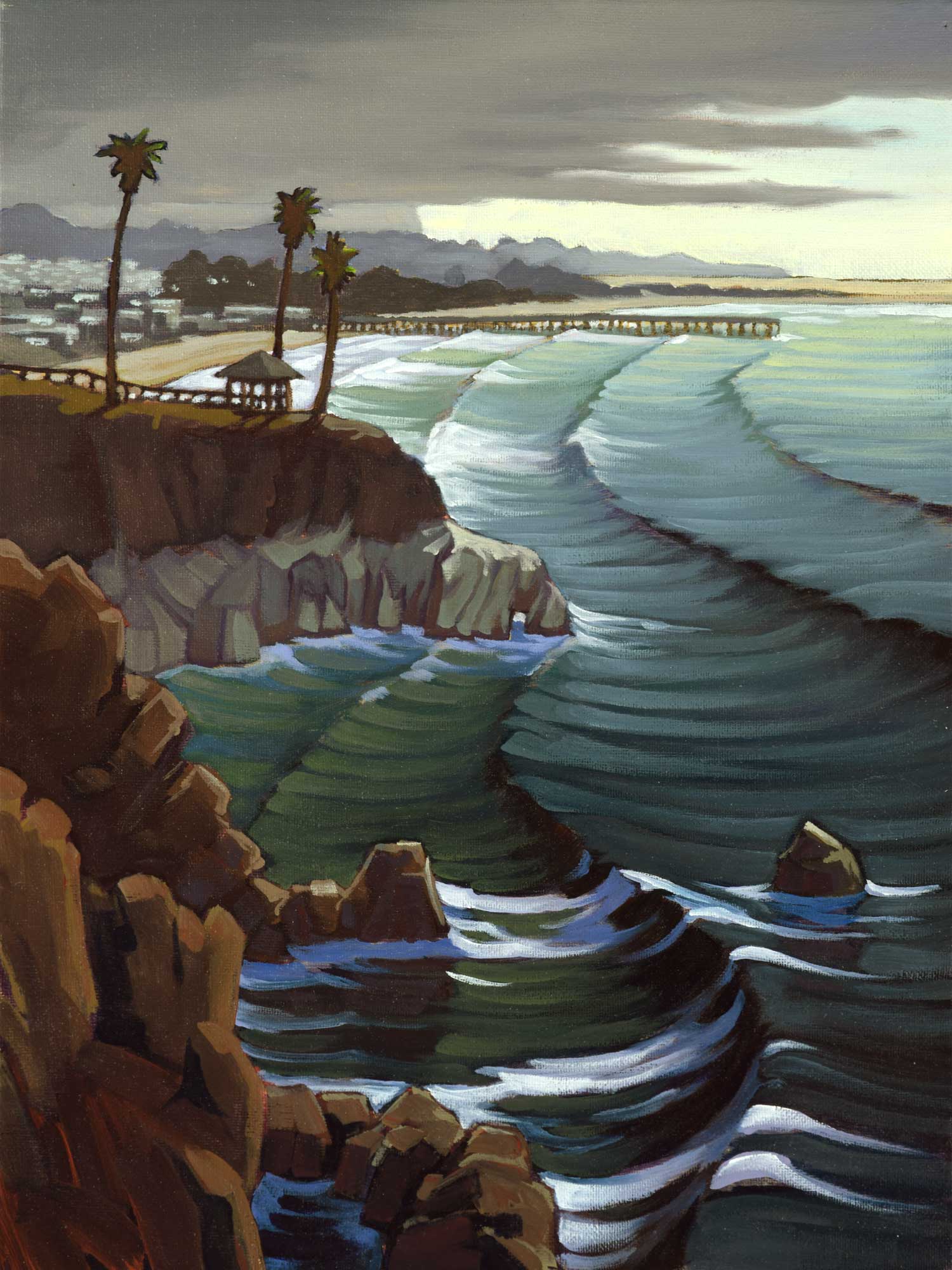 A focal point for those just passing through. After miles of inland panoramas the road opens up to a view of the ocean here. But only for a moment or two. Then it’s back to the cows and the farms and the country music. It’s hard not to stop once in a while. It’s just so easy. And when traversing the entire state north to south in a hurry, it’s often the last chance for a quick dip in the sea before dark.

This was painted on one of those gray days where the midday light is filtered and flat, so I used the landscape and bending lines of swell for the architectural reference for this composition, but entirely invented the more dramatic light. Sometimes you just have to find inspiration where you can.

In this case I was inspired by a memory from my youth that took place here around 30 years ago. But it was more than the just a memory, it was also an important life lesson- one that every ocean-going person learns the hard way at one time or another.

My folks had to make a trip to the area to visit my grandparents nearby and we ended up staying a night or two at one of the hotels that line the cliffs along here. They let me take a friend along on the trip and the first thing we did when we arrived late in the day was to go look at the waves from in front of the hotel. We stood watch there for a total of maybe 2 minutes and decided it looked like fun waist high waves and rushed down to get a few before dark.

I had only been surfing for maybe a year at this point so it never occurred to me that the waves could be bigger than they looked from the cliff. My friend didn’t surf at all, he just grabbed his boogie board and a big grin and hopped in the rip current with me and we both got sucked out to sea and straight into solid set wave closing out across the beach. We emerged and reeled in our boards, eyes wide and way out of our league, wondering what we’d gotten ourselves into.

We scratched for the horizon as more sets marched in and made it over them unscathed. The relief was short-lived though as we realized the swift current was pulling us north into the steep cliffs and if we didn’t make it back to the beach quickly we’d be unable to get out of the water at all. The day was nearing an end and I had visions of helicopters searching for us in the dark. Yikes.

No time to overthink it, we waited out the next set of waves and immediately paddled toward the beach in an all out survival sprint. Clearing the outside bar was a relief and I still recall looking over at my buddy as mid-sized wave walled up and we both managed to scratch into it and ride it back to shore. He still had that big ol grin. I don’t know how I looked to him, but I promise I wasn’t smiling.

3 lessons I learned that day. First- it’s almost always bigger than it looks when watching from a cliff. That’s a lesson every ocean-going person must learn the hard way at one time or another. Second- I am a big chicken. It was probably only head-high. I am still a big chicken today. Whatever. I still have fun out there. Third- leave it to a teenager on a boogie board to think near-drowning is kinda fun.