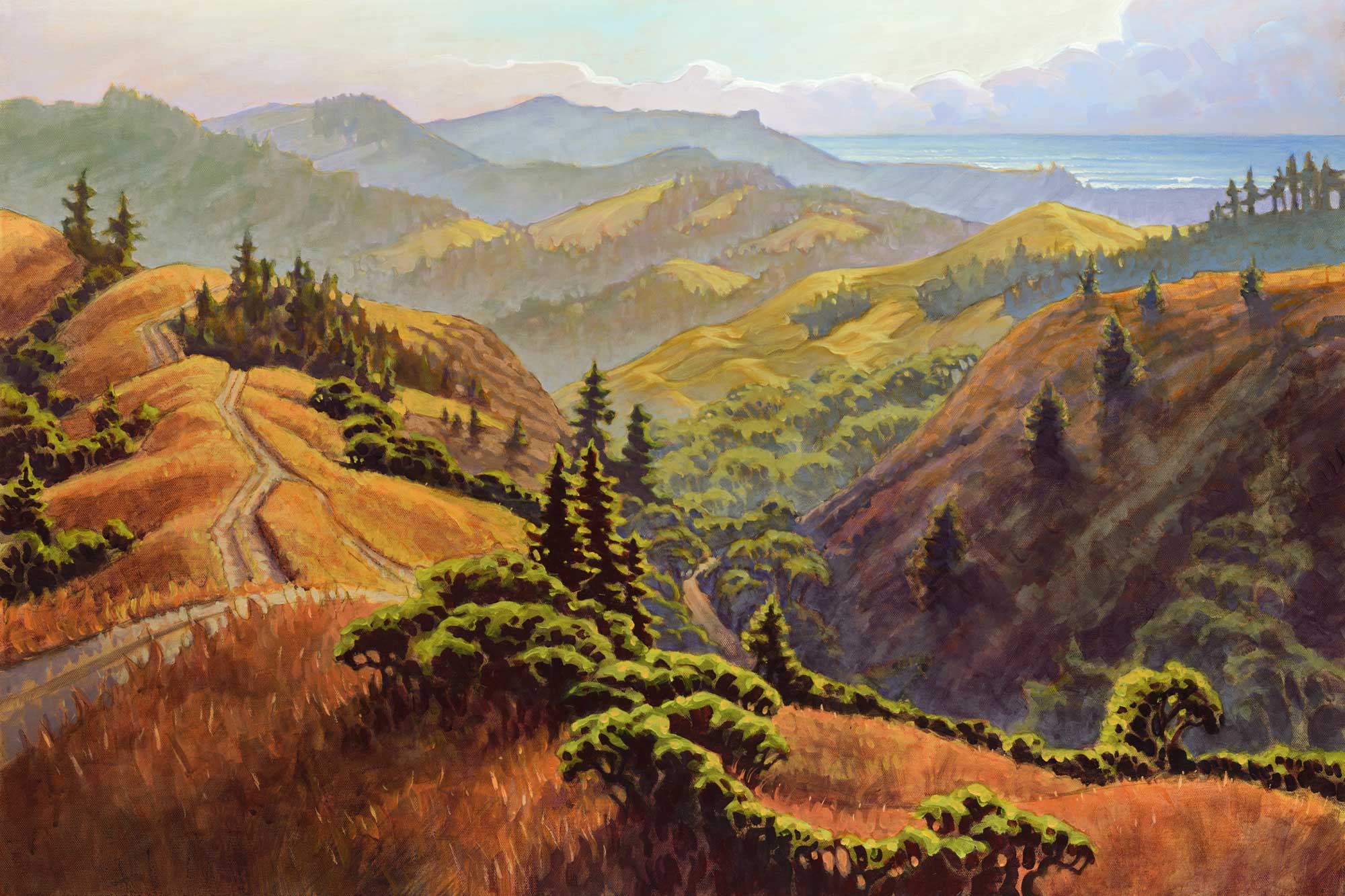 The land behind me as I painted this view belongs to Neil Young, and I couldn't help but recall him singing the old Woodie Guthrie tune This Land is Your Land:

As I was walkin', I saw a sign there
And on the sign it said "no trespassing"
But on the other side, it didn't say nothin'
That side was made for you and me

Had me tempted to go walking right through his land. But I'm pretty sure it was just a song he was covering and not his life manifesto or anything and if I'd made it very far at all nobody would have thought it was all that witty of me.

And besides, I was dropped off here to paint the view from this ridge and it was far more beautiful looking this way than over at his hills anyway.

I had learned it was Neil Young's property from the guy who drove me up and dropped me off up here.  He's spent a lot of time on this property and knows everyone pretty well.

He even knows the caretaker of the cattle up here, the same cattle that we had to slowly navigate through just after the second gate, and he knows he's a real... let's just say handful. We see the cattle man coming up the hill in a cloud of anger and we pull aside to let him pass and he's yelling and spitting as us, red in the face, because a water truck is coming up behind him and I guess he's afraid we'll just plow into it blindly instead of pulling over like we had just done for him and he's also yelling about some loose cattle, and I'm thinking, yeah they're all pretty loose, just hanging around. Who ties up their cattle anyway? They were all together, we didn't see any single cows roaming free anywhere else and we close every gate behind us as we went along, and besides we had permission from the ranch owner to carry out this art mission anyway, but everything makes this guy madder so we leave it at that and wait for the water truck to pass.

We sat there for a long time. Long enough to hear my driver's story about the time he carried an 8 foot life-size crucifix up the hill in the spring mud when his truck wouldn't go any further and dug a hole on the peak and stood it there for the owners to find on their own sweet time.

He was put up to that by some friends that knew the owners were grossed out by the goriness of the catholic crucifix.  When the owners finally found it and were sufficiently grossed out by it, they had him carry the cross back down the hill and put it under the covers in the bed of the friends they suspected of the original prank while they were out of town, repranking the prank if you will.

And this poor guy gets stuck carrying the crucifix everywhere he goes. Not today, though, today it's just me in the truck, and even if I carry the cross and believe in Christ's sacrifice in my heart, I am not some grossly carved replica of the bloody event itself. I am just a painter driven by love... and right now by this crazy cross-carrying pickup driver that is driving just fine all over these beautiful hills, thank you very much red-faced man.

We wonder how long this water truck will take and start to wonder if it could be a real long time so we drive slowly down the road and sure enough after one bend there she comes around the corner and we pull off nice and easy and let her pass. Smiles and waves. All nice and easy like it ought to be on the back hills of a cattle ranch near sunset. Order restored.

But my cross carrying driver is out of smokes now and says he and the others are gonna need more tonight, so off we go to the market down the hill. Except the market is a bar, with a band playing a Neil Young tune out front and my friend has left his wallet and shoes behind and since it's just me and him in the truck we hold an election and I am nominated to go in and buy the smokes since I have shoes and a wallet.

We'd just left Neil's neighbor's ranch where live bands were playing all day in the valley beneath the ridge where I painted. Did I mention that part? I was here for a music festival I've been an artful part of for a few years running. I couldn't hear a single bit of music from up the hill where I painted this though, so this market/bar music was the best bit of live music I'd heard all day as I walked in the bar and right back out again since they didn't sell any tobacco at all. Good for them. But bad for us because that meant my new pal would need to drive us all the way to the next town for smokes.

We rolled through a valley where the old Hippies went to become new Hippies. Nobody is a real Hippy anymore, you know that, right? Everywhere I go now, Hippy is a dirty word, or a pedestal on which lives some Greco-American nature god who can do no wrong but doesn't actually exist beside us in flesh and blood. It's like calling someone a Christian. You know real Christians this and real Hippies that. I love Christian Hippies. I know a guy whose whole deal is making Christian Hippy tie-die t-shirts and quotes Jerry Garcia lyrics as cryptic gospel passages all day long.  He'd love this valley. Full of old broken down vans that the Merry Pranksters once called their homes, back when there were real Hippies and real Christians all over the place seeking truth like it mattered.

Speaking of truth my guide wasn't sure of the truth of this but he's heard that the last grizzly bear in California was killed in this valley. We both sorta wonder quietly at that and mumble a few things. But mostly because this road just kept going and going. It got quiet for awhile and we finally arrive at a country market, where they do indeed sell cigarettes and so I return victorious this time and even though it's only two packs my driver pal seems satisfied as we contemplate checking out the old bar next door. Says he knows a lot of the regulars there. I'm thinking of the music festival that I'm missing right now, but I say nothing, because this is where I am here and now. And If I'm about to roll into this bar with this guy then I want to be all in cause I'm just along for the ride and it's out of my hands anyway and did I mention I'd been up since 4 in the morning?

We crank our necks in deep concentration and focus as we turnaround and leave the market and bar behind us and continue discussing the merits of a good drinking hole where people like to be. I guess we were looking for people we know, some excuse to derail our night. Stranger things have happened but not here and not now. We drive back uneventfully and return the truck. It wasn't ours.  We borrowed it from one of the musicians who's helped organize the music festival for the last fifteen years. Yes, the same music festival that I've been unintentionally avoiding all day. He told me during a sound check that morning that I could borrow the truck to drive up to the ridge, but I wouldn't have made it past the loose cattle so I was glad my cross carrying driver overheard the conversation and stepped up to the plate.

The driver knows everyone.  He and the musician go way back also.  He's helped tear this old truck apart and rebuild it with the musician multiple times. The musician is a genius electrical engineer and he was married last year in small ceremony up on the hill where the crucifix once stood. God bless their marriage. His wife can sing Led Zeppelin's Ramble On like nobody's business, so they'll always have that going for them. When I first became part of this festival years ago, I heard these two playing music by the fireside after the bands were done on the main stage, and a little part of my soul ascended with the smoke and melodies into the night sky and I will forever be looking for it whenever there is fire and music near each other. This could be taken wrongly I suppose but I think I just see these two as fire and music and I love them both even though I hardly know either of them and I wish the best for their lives together.

Even now the night is coming on and I'm avoiding my third peanut butter and jelly sandwich of the day and eating two slabs of steak from a friends cooler while the final band takes the stage in a whirl of light and intentional discomfort. A man born of Irish and African roots. Illegal love. And with the voice of a hundred street preachers and a band to back him up that makes music entirely out of electric velvet.

Soon enough this Prince from Oakland settles down and the usual crew of musicians makes their way to the firepit and continues into the night. There's a lot of folks lingering to listen and me and my buddy and his lady sneak under a hammock and lay in the grass to get a glimpse and hear the music continue on it's own softer pace. And guess who is there?

That's right, my driver pal is there and belting out some of the sweetest lines and tunes you'll ever hear including one about his grandma's passing that had me holding back tears. She was a real Christian, and maybe a real hippy too. Not sure, but I know she prayed for him, that's for sure.

Before I know it the three of us are in the hammock together, just enjoying music and a bit of warmth like the cattle are probably doing up on the hill right now, sans the music. I hope the loose cattle has returned to the warmth of the others by now. It's cold out here. Thankfully when my friends retired for the night they left me their blanket and I went horizontal proper on that hammock and fell asleep to the best sounds on earth. I hope my snoring at least kept the beat for the music as it rambled on until morning.

And all this madness and love is why I'm here and why this painting happened at all. The folks who own the ranch where this festival has happened for the last 15 years are selling the property and all the musicians rallied and hired me to come paint the scene as a gift to the ranchowners who have opened their land to the music, and the crazy nuts that play it, for all these years.

It was an honor and a joy and I don't know what else to say.

So I'll say nothing more.