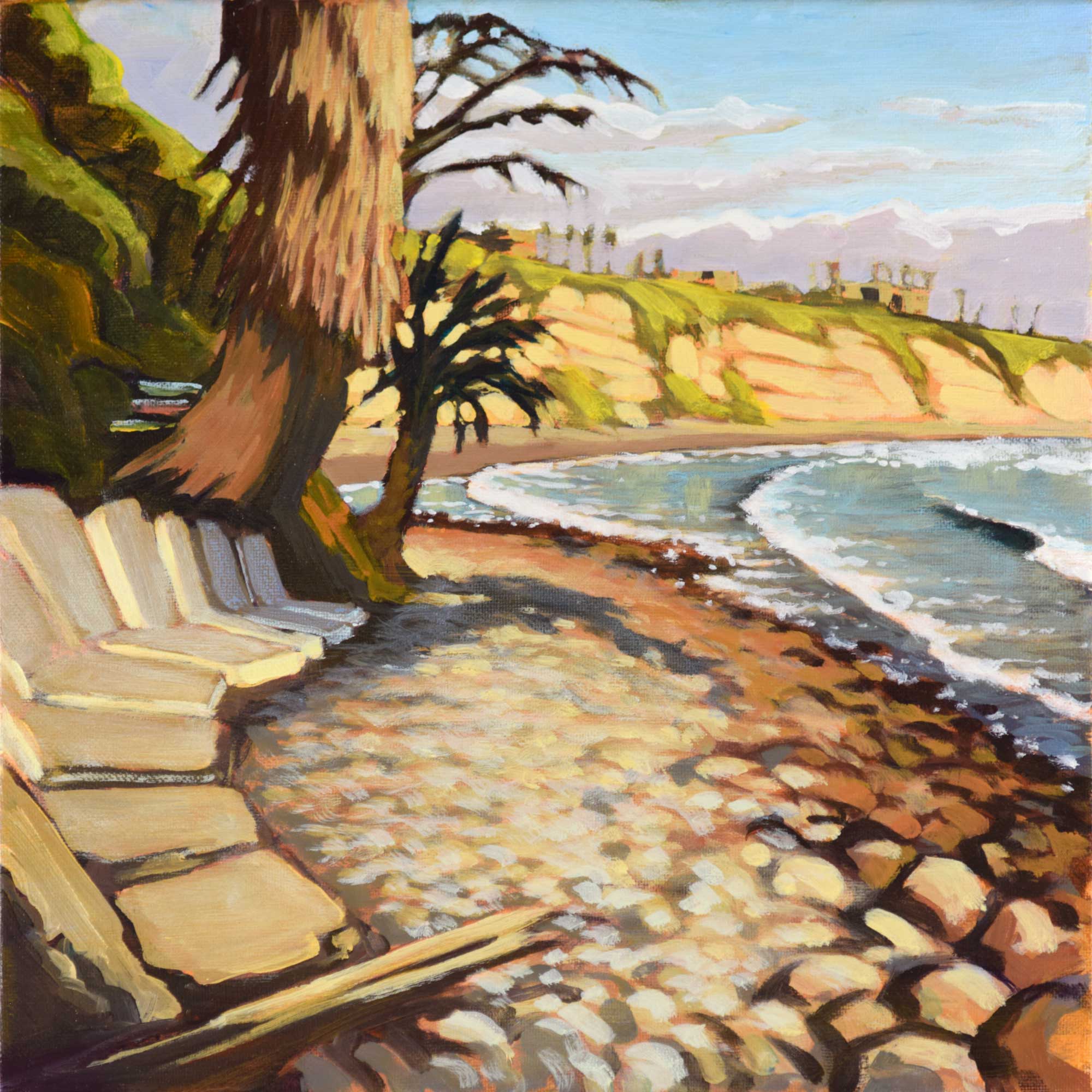 In other times what appears to be an old road must have collapsed into the sea here, the slabs of concrete line the point and have been beaten and weathered into pieces, at times rounded smooth, at times broken and jagged. The locals here have gathered together some of these slabs and arranged them into a row of benches from which to sit and talk story, heckle visitors, drink beer, play music, or all-of-the-above. I’d seen this little scene earlier in the day and wanted to come back and paint it in the afternoon.

I’m pretty quiet about my whereabouts when I’m on a painting trip (it’s all too easy to get wonderfully distracted by even the best of friends sometimes), so I was thinking it was quite a coincidence that an artist friend of mine who lives in this area messaged me out of the blue on the morning I was heading out to paint here about what sort of plein air easel and setup I used. During lunch I told him it was primarily a self-built custom job, right before heading down to paint this scene, but never told him where I was or asked where he was that day.

When I arrived, I was a bit disappointed to see these makeshift benches in full operational glory by a small crew of locals. One had a guitar, there were coolers, they were clearly posted up for the time being. It would be awkward to approach a group like this and just start painting the spot where they sat, so I figured I’d have to have a conversation and see if they’d mind, fully prepared to come back another time if they weren’t into it. Not because they own the beach, but simply out of respect- after all, they were there before I arrived.

As I began to make my pitch to this crew, the one sitting closest to me looked up, and slowly pulled his sunglasses down to see me better, and I had to laugh as we both realized who the other one was. This was none other than my friend Paul Elder, who had just asked that morning about my easel.

A cold beer was produced, and a demonstration of my painting setup ensued as we chatted art and life nearly the entire time I painted this one. Not sure why I didn’t paint in any of the crew that were hanging out on the benches this particular afternoon- to tell the truth, I didn’t even think about it. We got to talking and somehow I just painted the painting I was thinking of back when those seats were empty. Only after I was done did I think maybe I missed an opportunity for a painting with a lot more… character.

Anyway, Paul is crazy good artist. You should look him up. He does all the art for Ballast Point beers.

Nothing but Respect for the Elders.

Artwork Title: "Respect the Elders"
Posted on May 7, 2019July 15, 2021 by Matt Beard
Categories: Artwork Notes & Backstories, Artwork Notes, Artwork
Tags: AFTERNOON LIGHT, BUSTED UP CONCRETE, COBBLESTONES, FREE BEER, FROM THE BEACH, HAVE A SEAT, LOOKING BACK TOWARD LAND, PALM TREES, ROCKS, THE OTHER PAINTER BOUGHT ME LUNCH OR AT LEAST A BEER THOUGH