For the ordinary soul who owns not a boat or a plane, the only way there is by your own two feet, one step at a time. Unless you are the ordinary soul’s dog, in which case it’s more like your own four feet, two steps at a time or something like that. In other words you’re just gonna have to hike. Eight miles. On sand and cobblestones loosely piled up between vertical mountains and the deep blue sea. Only at low tide. Higher tides and the surge of large swells will submerge that little eroding sand bridge to which your feet (or paws) will hopefully remain planted upon.

One such surfer and his dog endured that hike in the late spring one year, after a season of heavy storms, which swelled the creeks and brought with it a series of rock shattering swells and a fierce longshore current that removed all but the most stubborn sand deposits. Oh sure, they scored some quality surf, but it was a ride they took on the hike back that would define the trip.

It was one of those days when the low tide wasn’t really very low. Combined with the somewhat unruly and large swell, these were not the optimum conditions for attempting this hike. But since boatless , planeless, and now foodless ordinary souls and their dogs tend to need to get back into town once in awhile, they really had no choice. The day was getting late. Only a mile or so to go and then it happened.

The ocean seemed to calm a little, and the air became quiet. There was no reef or sandbars on this particular stretch of sand, just deep water. Taking a check of his surroundings as an alert surfer will do when the ocean changes her tune, he knows he’s in a tight spot. Sheer crumbly cliff greets his left hand, the big lulled ocean his right. Up ahead about 60 yards is a somewhat higher sand berm he’s been heading toward for the last ten minutes. So close, but with the forty plus pounds of gear on his back, it’s a good minute or so away, even at full speed. The swell is running at a 17 second interval. He grunts and picks up the pace, but no sooner than he became aware of making that decision, he sees the deep water welling up on the shore.

Seeing the futility of racing this impending wall of water he braces for the worst. He sees his dog running for high ground and as he digs his hands into the course and cold sand he watches the first surge of water envelop his companion of the last seven years. A second later it’s his turn. Larger than he had anticipated, the oncoming whitewater makes quick business of uprooting him and tossing him shoreward into the cliff. Then comes the rebound back to sea. Like a rolling stone he is pulled off the beach, barely getting a gasp of air before going deep into the drink. Being dragged to abnormal depths by the pack on his back he wrestles himself free of it and begins the task of exiting through the large shorebreak.

Finally making his way up the beach, he stops and looks for his dog. Scanning the shorebreak for any sign of life, he finds none. The ocean gives and takes away. As if to cruelly punctuate that thought, he spots his pack rolling up with the next surge. Quickly dragging it up the beach and making his way to the higher and drier ground, all he can think of is that nothing in that backpack is worth anything next to his old friend. The beach is broad and wide the rest of the way, so there is no need to hurry now. There is time to sit and wait. To hope and pray for a better ending to this bad dream. A good hour he sits and almost dries out, never taking his eyes off the shorebreak, scanning for any sign of life. But there is nothing. It’s almost dark now, time to go.

Emotionless, he finishes the hike to his truck. The warm beer that awaits him there brings no joy or satisfaction this time, just a little more numbness to wash down the plateful he’d just eaten. He heads to the overlook as was his usual custom, just to stare back up the coast and put the period on the last sentence of this chapter. The sun is down, just the dimly lighter western sky illuminates the thoughts he is lost in. Just as he turns to go he hears a faint noise that penetrates the walls around him and brings him full force back to the here and now. Even from this distance and through the constant sound of the crashing waves, he knows that bark.

He hollers back and saves some beer for his friend. 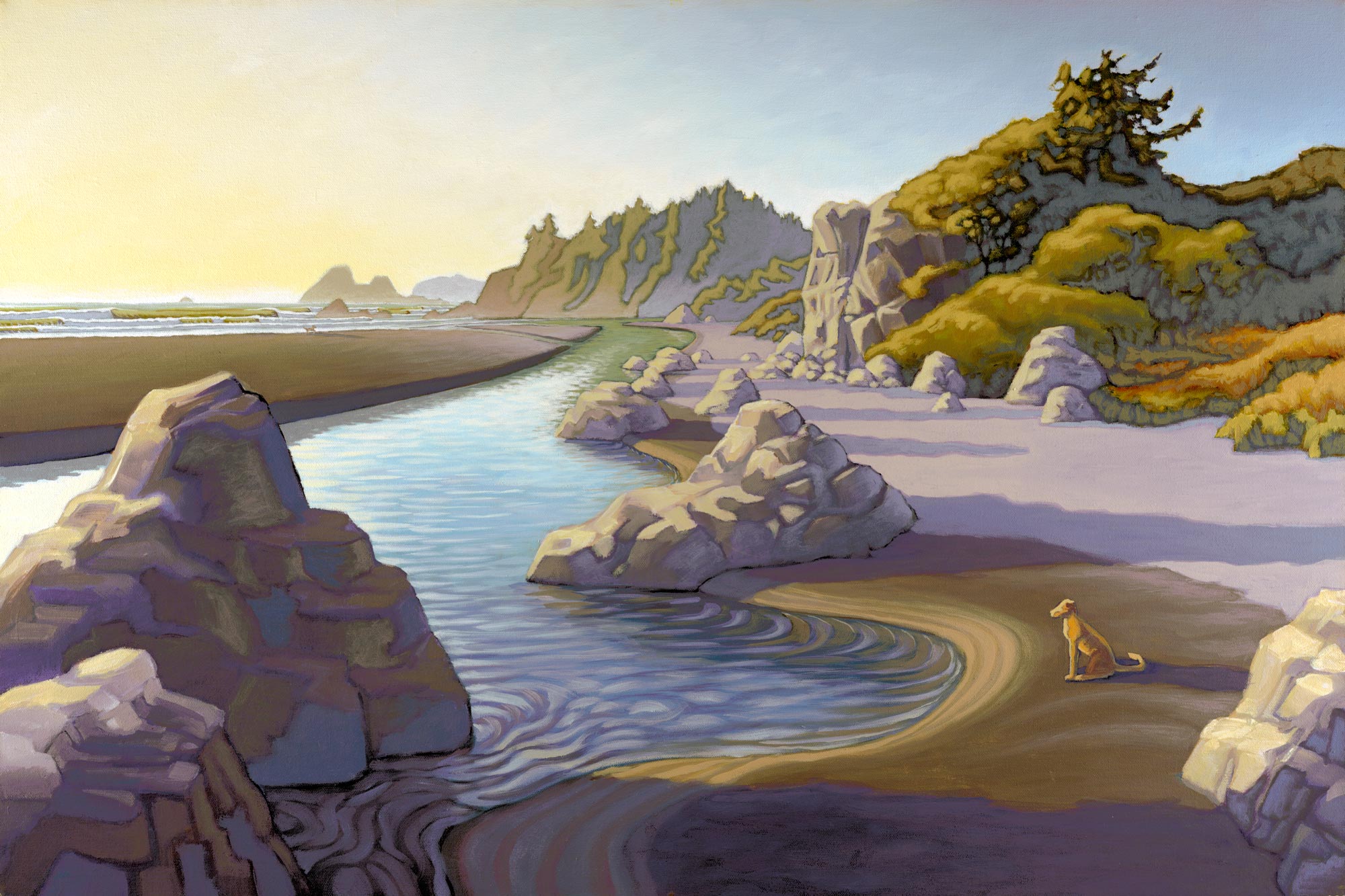 WAITING FOR HIS HIS MASTER