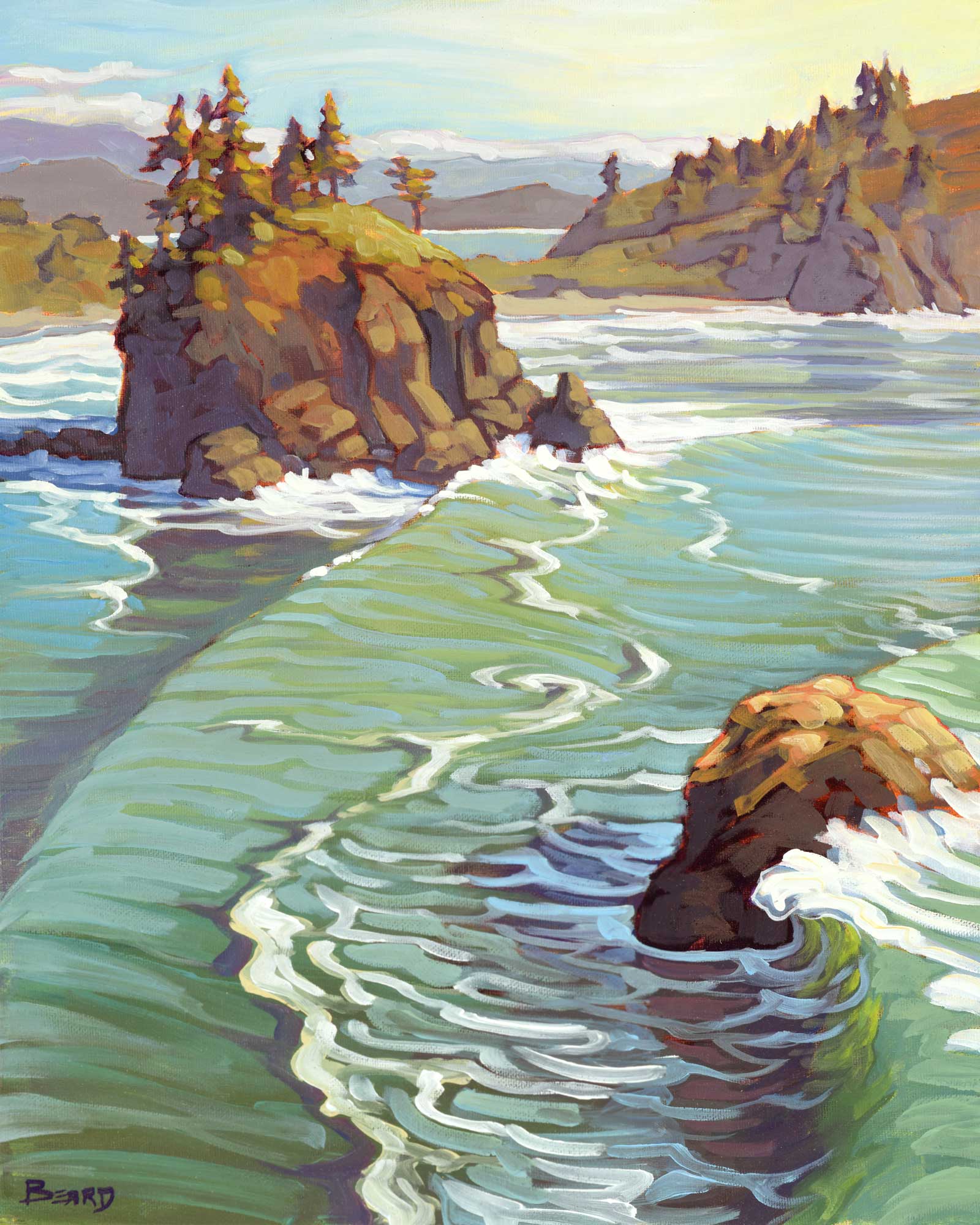 At high tide that rock with the trees on it is an island, but at low tide you can walk right out to it. Over 20 years ago I ventured out to it with a friend, our minds set on climbing up to the top of it.

Except neither she nor I were the climbing types, we were just a couple of wide-eyed college kids, checking out this great big world that we were supposed to make sense of real soon.

We approached the base and made our way to the north, then to the south then back again, looking for some non-death-inducing route up the vertical side. After a few false starts, we surrendered and made our way back to the beach.

As soon as we reached the sand, we looked back and saw a couple of people climbing down off the rock. Their fluid movements made their descent look effortless. As we stood there watching their route, we realized it was a young couple, not much older than us, who were oddly… not really wearing any clothes?

Ok, she wore some tiny bikini bottoms, and a jacket that she took off and gave to him once they made it off the rock and back on to the ground. But that was it. No shoes, no shirts, no pants. Just a couple of nearly naked hippie kids making this daunting climb look like a stroll on the beach.

We watched in amusement, from a respectful distance, and after a quick discussion, we decided that we would just wait for them to wander off back into the forest from whence they came and then make our way back out, and follow the route they took. After all, we had jeans, and shirts. We even had boots on. We could do this.

Going up was not hard at all now that we knew what line to take. Making our way all the way up and over, we enjoyed the afternoon up there lounging on the grassy meadow that looked out toward the slowly setting sun.

We sat there watching the white trails drifting out from the various rockstacks, and shallow waters where the waves churn the ocean into a thick foam. We began to see them that day as ephemeral recordings of the ocean’s rhythms, songs recorded on the water, every set leaving a thicker trail, and the calmer moments a barely visible line. The record player spinning at the speed of the ocean’s current.

Seeing the tide had turned, it was time to leave or else we’d be facing a pretty good soaking trying to get back across the tidepools to the beach.

And yes, in case you were wondering, we kept our clothes on the whole time.

Remember I said we weren’t the climbing types? If we had been, we’d have known that climbing down is a much more difficult challenge than climbing up. We discovered that shortly.

The upper portion wasn’t too bad, there were plenty of tree roots to grab hold of as we made our way down the eroded hilltop on our way to the steeper rock face below. That rock face itself was fairly easy to climb as well, consisting of solid rock with lots of cracks and features to provide good hand and footholds. The zone in the middle though….

I’ve never climbed down a scarier chunk of earth in my life than that middle portion where the eroded dirt faces became too steep for plants and trees, but still consisted of slippery hard packed, smooth worn dirt that just gets steeper and steeper with nothing but vertical rock and shallow waters below. If she or I had slipped on this stretch I’m not sure there’s any way we could have stopped ourselves from sliding right over the edge.

Of course we made it down safely, and I’m sure much of the danger was only being magnified in that wide-eyed lens of my youthful mind. Either way, it was a relief to look back up at that rock from the safety of the shore.

Although I’ve been back out there on low tides many times since then, I’ve never even considered attempting to climb up that rock again. But still, when I see it standing out there, and catch a glimpse of that grassy meadow, I often recall that afternoon, that climb, and those naked hippie kids who showed us the way.