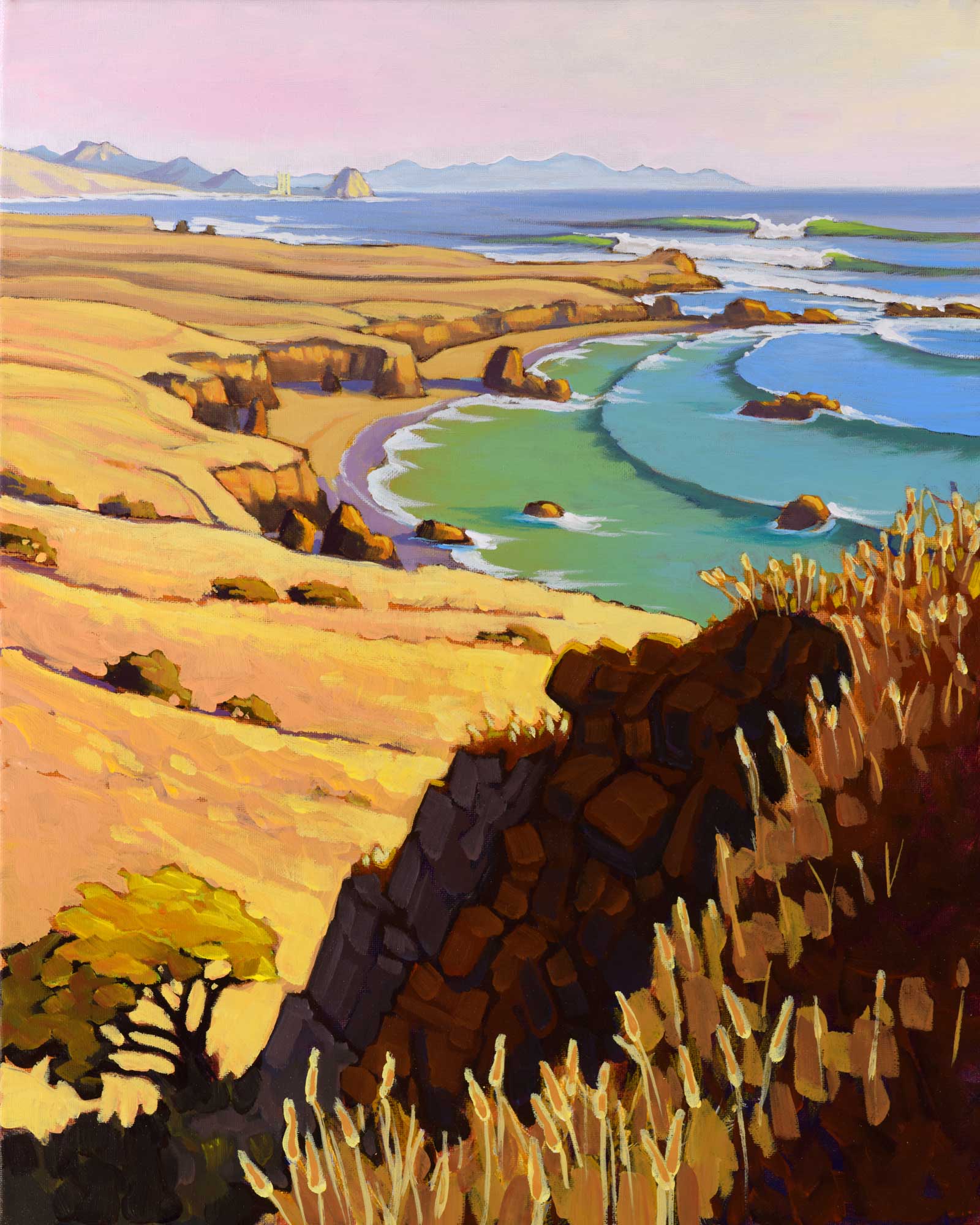 I’d been wanting to paint this stretch of coast for years. It’s not a place I’ve visited much, but even driving by as a kid learning to surf years ago, this area called to me. The deepwater reefs and powerful surf were out of my league and no doubt when things get real out there they still are. The angle of the coast around that bend looks nearly due east to the place of the rising moon (no moon at this time, it was around the time of a solar eclipse, so if you’re a moon person, you know that only happens during a new moon, but you should see this place when the full moon rises… oh my, but I digress).

As much as I am drawn to this area, it seems the police are drawn to me here as well. I’m a slow and mostly careful driver and don’t get pulled over much, but I was pulled over  ight here, maybe 8 or 10 years ago, driving my old GMC van. Pretty sure my muffler fell off just prior to being pulled over. I managed to stop and retrieve it, throwing in the back of the van, muttering my best impression of an Aussie friend in Baja when part of his old Ford Hornet wracked itself loose over a large rut in the road, “Reckon we might need that later, mate.”

And you should have heard that old van without the muffler. It was the best aftermarket upgrade I’ve ever had done to a vehicle. Sounded like a big ol’ motorcycle, a rumbling racket of yellow radness. RIP Vandura, you were a beast.

But it wasn’t the missing muffler that I was pulled over for. The officer said my license plate light bulb was out… Really? Who gets pulled over for that? I think he just wanted to take a look in the van and scope out all the contraband that wasn’t there.

He starts by asking for my driver’s license. I hand it to him and in the photo on the license I was actually really clean cut, fresh shave, button down shirt, all that. He looks at my big ol’ bushy beard and rat’s nest of unwashed hair pouring out under my hat, then back at the photo and says, “I don’t see a beard on here,” to which I say, “no, no it’s on there officer,” and proceed to point to my last name on the license. (These days I’d have likely been pulled out of the car and pinned down for reaching out the window like that, but like I said it was a while back.)

He laughed and changed his whole tone after that and let me go. He didn’t even write a fix-it ticket, and come to think of it now, it never even crossed my mind to fix it either.

Fast forward to this day, and while painting up on this hill, a police car pulls up just at the base of the hill right behind my van and I see the officer in the patrol car watching me up here. This being public land, I certainly wasn’t trespassing, I was parked legally and all that, but it still stirred up that distant memory of the earlier interaction I’d had on this stretch of road.

Then, I kid you not, later on as I packed all my gear (and this painting) back down to the van, another officer pulls up and watches me load my gear back in the van. Just staring me down the entire time, like he was waiting for me to make a false move and let all the weapons and drugs spill out of the van into the parking lot, because everyone knows that’s what artist’s vans are usually packed full of, right? Ok, maybe not. But still to this day I’m not sure what he expected see. He must not have seen it either, because as soon as I’d loaded everything back in the van without any spillage of contraband, he drove off
without a word.

Good grief, this seems to happen a lot in these parts. I guess that’s just me around here. Matt Beard- Almost Wanted Fugitive Van-Driving Art Guy.