One hot afternoon I was digging a roadside view on the coast beside a nearby produce stand’s sign announcing "Sweet Cherries for Sale" and had just gotten set up when the cherry slinger walked up and told me I'd have to move.

He said I was blocking his Sweet Cherries sign. I wasn't, but I could see how from over at his stand it might look that way. I began to tell him about my road trip and how far I’d traveled to paint this spot, which he seemed to immediately take as a challenge and interrupted to inform me bluntly that he'd driven all the way from Modesto... Ouch, he got me there.

And furthermore, he informed me that he had a permit to set up there, and even furthermore that since he was there first there was no point finding a mutually beneficial solution.

He was real good at cussing too. His parting shot was that I had to move or he would call the sheriff and have me forced to relocate.

A few minutes after he left I was still standing in the back of the van, wondering if this view was really worth the hassle when I look down out of my side window and see the feet of a uniformed official step out of his truck and approaching on foot. I was shocked that Sweet Cherry Man had the pull to get an officer out that quickly. I resigned to pack it up as I hadn't started painting yet anyway.

The official comes around to the back of the van and starts right off telling me I wouldn't be able to park there... then his face came into focus... and it was none other than a long-time friend and college housemate of mine who had been working with the State Parks doing trail construction in this area for years.

Apparently he'd driven by, saw me setting up in the van and talking to Sweet Cherry Man, and was just stopping to say hi and figured he’d joke around with me about moving the van as he walked up. He had no idea about Sweet Cherry Man's problems with me being here.

So we talked for a bit in full view of Sweet Cherry Man and after we were done catching up and arranging to connect later that evening for a meal and some beers, we decided to make a real show of him pointing at the van and at the Sweet Cherry sign and back at the van. Then I’d simply move the van forward and back a few feet and carry on as I’d now be safely parked and positioned by an Authority of the California State Parks. We even staged a very intentional handshake for added emphasis.

I was never blocking the sign, and permit or not (we were pretty sure he made that part up), he didn't own the side of the highway anyhow.

Pretty funny to think of Sweet Cherry Man down there, after giving me that earful then seeing me talking it over with a very official-looking park ranger (who drove up in a state park truck with a siren and
everything) and then staying put.

I wasn't finished painting when Sweet Cherry Man closed down for the day. When he came over to get his sign, he backed up as close as he could to the back of my van and made a solid effort to spray my van with gravel as he put all the horsepower his Chevy Astro could muster on the line. It was a rather unfruitful display of vehicular disgust.

But the biggest disappointment was that I had forever missed my chance to walk down there and purchase some of them Sweet Cherries from Modesto. 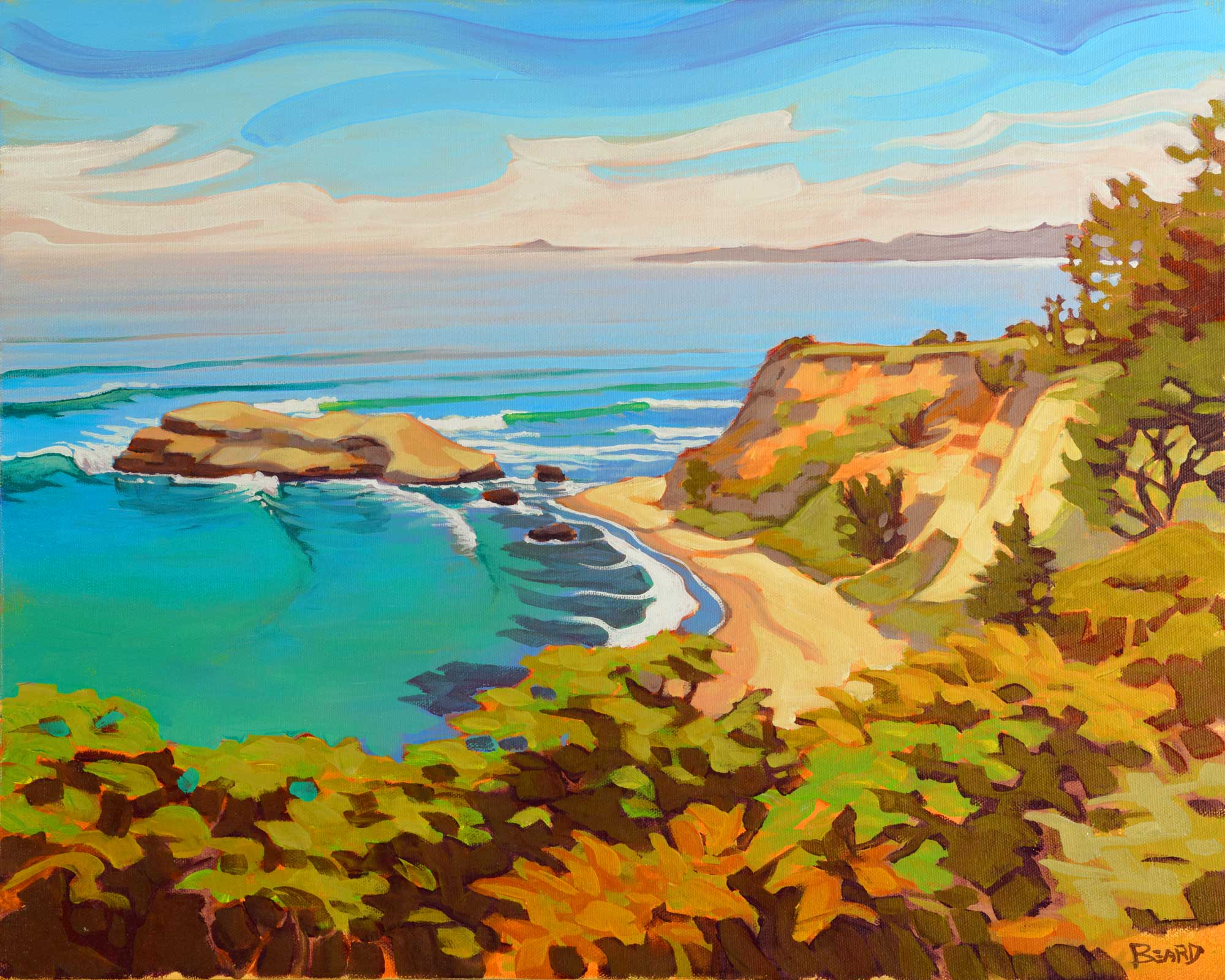 2020 Has been rough. Use code "2020!" at checkout for 20% off any site order for the remainder of 2020. Be sure to CHECK HERE for important holiday order deadlines and gallery hours. Cheers! Dismiss